contest news! everybody gets a vote 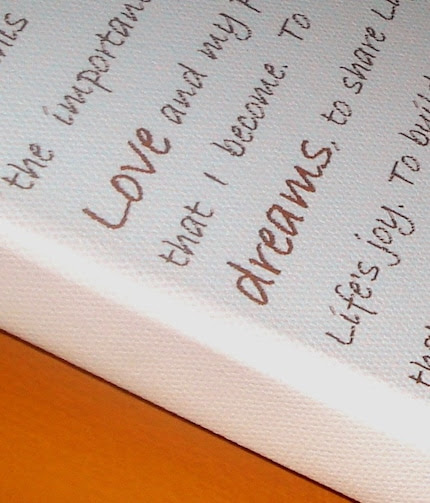 this was impossible. there are so many beautiful, happy, inspiring comments for the geezees custom canvas giveaway that (after consulting with stephanie) i will try something new:

i narrowed it down to entries who are still planning their weddings, then picked these three offbeat ideas, and *you* can pick the one you like.

for everyone else, thank you so much!! stephanie has extended her 10% discount to friday if you tell her etsy wedding sent you, and she is also now offering gift certificates if you'd like a wedding gift for a friend.

These are amazing! :)
My fiance and I have an appointment scheduled next month for a photo session in a tree.
Sounds crazy, right?
our photographer found a beautiful tree standing in a lone field.
We are going to climb it and take a few pictures.
Why?
We want to blow up a big photo and put the words 'Emie and Pepe
Sitting in a Tree
K-I-S-S-I-N-G
First comes love,
Then comes marriage...
October 18th, 2009.'

This canvas print would be just perfect for our idea.

I think I'd pick the photo of my fiance and I we took in Central Park, the day we got engaged... on our second date. I had flown in from London and he'd driven up from Montreal and to my shock and his, he asked me to marry him that morning. We're getting married this year (3 and a half years later) and I'd put that photo with the quote by Rumi:

Lovers don't finally meet somewhere,
they're in each other all along.

We're going to enter the ceremony at an old historic ranch house by riding our bikes to the opening song from Juno up a long country driveway. I have this image in my head of us laughing and riding together with streamers and dust trailing behind.

am trying out a new poll widget, please vote in the box below! (hopefully one will appear :) -- voting ends midnight EDT on thursday, 6/18.

finally, one last note. stephanie and i were both so moved by the comment below from erica that we decided to go in together on a gift canvas for her, entirely separate from the contest. we are sending all our best wishes to you, erica -- write me at etsywedding @ gmail.

I got so excited when I saw this!! I have 2 that I have actually planned on buying from geezees, just waiting for the right time..

1. My roommate, and one of my bestfriends, married an awesome guy Sept. 6th last year. For their 1 year anniv I have been planning to get one of their wedding photos with the poem I Carry Your Heart on it..this poem was read at their wedding. They've always been there for me so this is my way of saying thank you!! :)

2. My fiance was in the army and went to iraq 3 times and lost 7 of his best friends... he was home for about a year and a half after the last deployment and was killed in a car accident Jan.28, 2009. I have a photo of him and some of the guys in iraq that I have wanted to get on one of the huge canvases with the words below...

"They shall not grow old,
as we that are left grow old:
Age shall not weary them,
nor the years condemn.
At the going down of the sun
and in the morning
We will remember them."

I would probably just use the discount for mine and give my friend the giveaway if I won! :)

hello readers -- thank you so much for your thoughts! I do my best to respond, please know I appreciate and read them all.

with that said: PLEASE DO NOT LEAVE SPAM COMMENTS. It takes your time to write and my time to delete, and I will delete every one of them.
書かないで下さい SPAM。 私はそれを削除します。 ありがとう。

(comments made more than 2 weeks after posting are moderated to cut down on spam -- thanks for your patience!)

suggestions on the layout? what do you think?

{{about etsy wedding}}
it started as procrastination! helping plan my sister's vegas wedding in 2007, sifting though all the regular stuff on etsy.com to find truly extraordinary things: the best artists, DIY resources, and handmade wedding finds.

plus more great DIY + wedding reads
such a relief that people have done this whole marriage thing before and are writing about it. 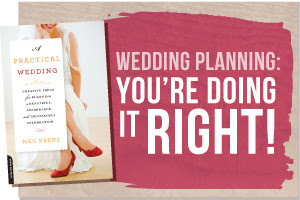 my own little etsy store